Schumacher vs Hamilton: Looking at Podiums

The age old question, who is faster: Schumacher or Hamilton?

Let’s take a deeper dive and take a look at their respective podiums. Lewis currently has 10 more podiums than Michael, a seemingly narrow margin, but this doesn’t tell the full story. One of the main factors to consider is Schumacher’s opposition, here’s a look at the 2004 standings for Michael or 2020 standings for Lewis, years in which they both drove what are considered their most dominant seasons respectively.

Even when comparing their most dominant seasons, there is a difference in talent on the grid. In Michael’s career, from 1991 to 2006 (excluding his return when he wasn’t challenging titles), he faced a star studded grid: Nigel Mansell, Alain Prost, Ayrton Senna, Damon Hill, Jacques Villenevue, Rubens Barichello, Jenson Button, Fernando Alonso, Kimi Raikkonen, and the man he respected the most, Mika Hakkinen. Michael had an extremely tight field and would often face one of them in the title  deciding race in the last round of the championship. Lewis, on the other hand, faced Kimi Raikkonen, Jenson Button, Fernando Alonso, Felipe Massa, Sebastian Vettel, Valtteri Bottas, Max Verstappen, and most famously, Nico Rosberg. Although all fantastic drivers in their own ways, Schumacher arguably faced a more challenging grid.

That being said, and to make sure each drivers dominant years don’t drastically skew the data, we can look at the most podiums at a single track, this is a good way of measuring, as each racetrack appears once a calendar year (Except in 2020 because of COVID-19, but that didn’t affect our data as the race tracks included were not “double-headers”) meaning that the performance of the car over a season is not as important. 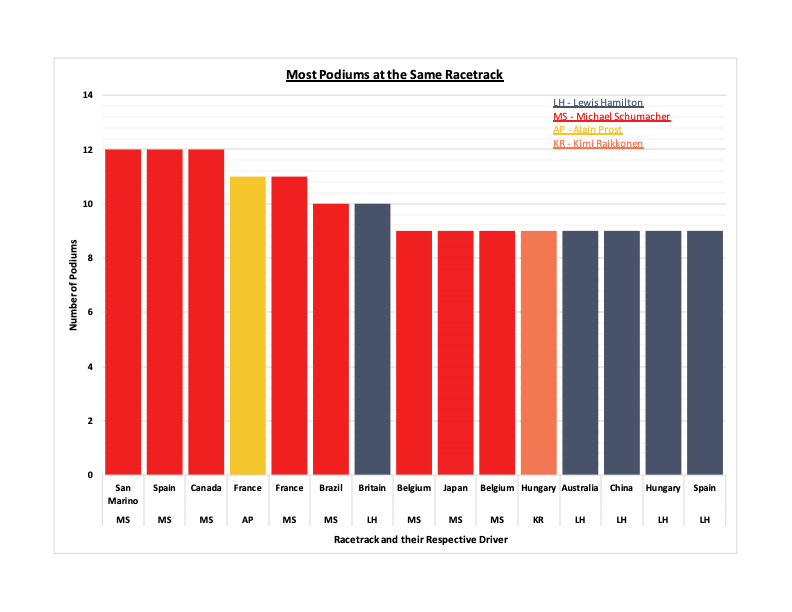 This data was compiled and created from the data set from StatsF1.com.

Looking at this, we can see that Michael had easily topped this list, with 12 podiums at San Marino, Spain, and Canada each to Lewis’s best result is 9 podiums at the British Grand Prix at Silverstone. Two things to note, Alain Prost manages to outperform Lewis, Prost being arguably one of the best drivers to ever grace Formula 1 until Schumacher’s arrival, and back in his day there were far fewer races per season. Another to make the list was Kimi Raikkonen in Hungary, at the Hungaroring. He was a 1-time champion in 2007, although because of how long he’s remained in this sport, and how consistent he’s been, he’s been able to reach this list at the Hungaroring. (Read here about Kimi’s strange and crazy antics).

In conclusion, when comparing the podium count of the two drivers, Michael seems to be victorious, he was much more consistent in his career than Lewis was, and considering Lewis was always in a podium-capable car (including the 2009 McLaren), he should have had more consistency. Michael’s podium count is much more impressive when you consider the pace of the first few Ferrari’s he drove.