Posted on 23rd February 2021 by divebomb Leave a comment

After Mclaren (whose car isn’t actually the same) Alpha Tauri is the second team to unveil their 2021 car. Let’s do an In-Depth tech analysis. 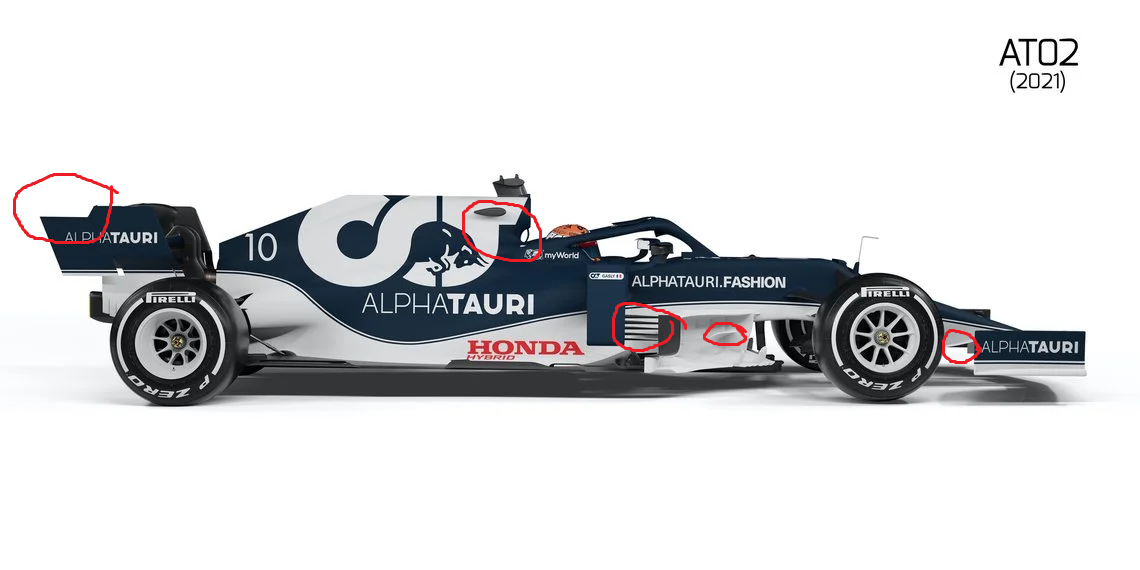 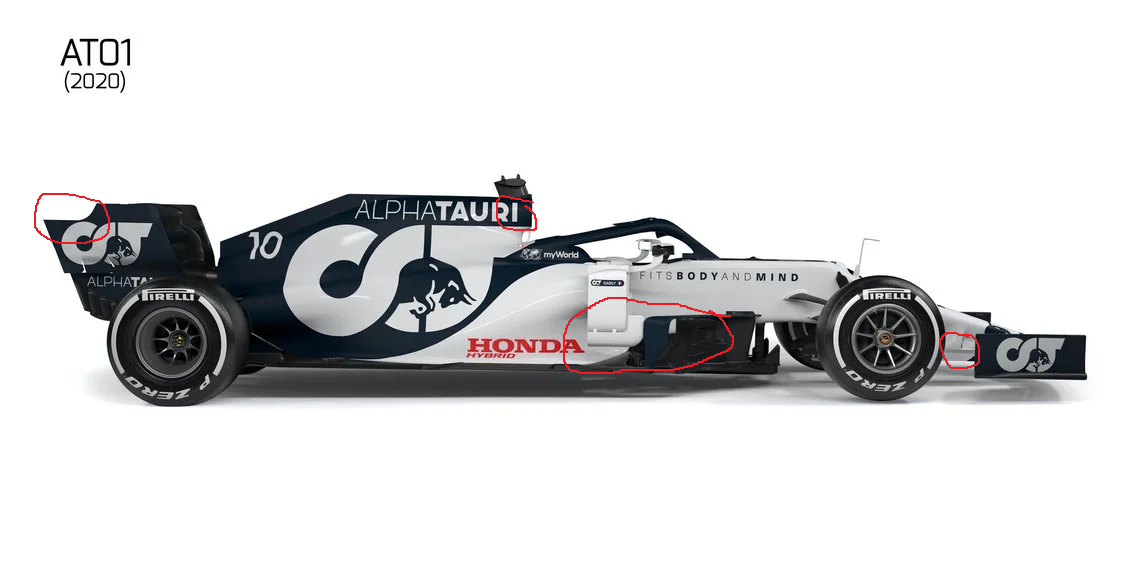 Firstly we take a look at the side view. I have pointed out a few notable changes on the car by circling them with red. The sidepods itself stayed pretty much the same but the team from Faenza changed the sidepod endplates and, no, they aren’t the same as RB16 ones. The RB16 had similar, multi-plate endplates like AT01. But this year Alphas chose very specific, horizontally opposed plates, also used to accelerate air and create air vortices. All of that to accelerate air flow towards the rear suspensions and diffuser. Another new design is that winglet on the sidepod area.

All these horizontal flaps are probably made to direct airflow lower towards the floor because there are less changes allowed on the floor itself.

The constructor from Faenza also changed the profile of the front wing. Last season, several teams opted for recognizable undernose shafts, but this season they returned to the conventional nose. 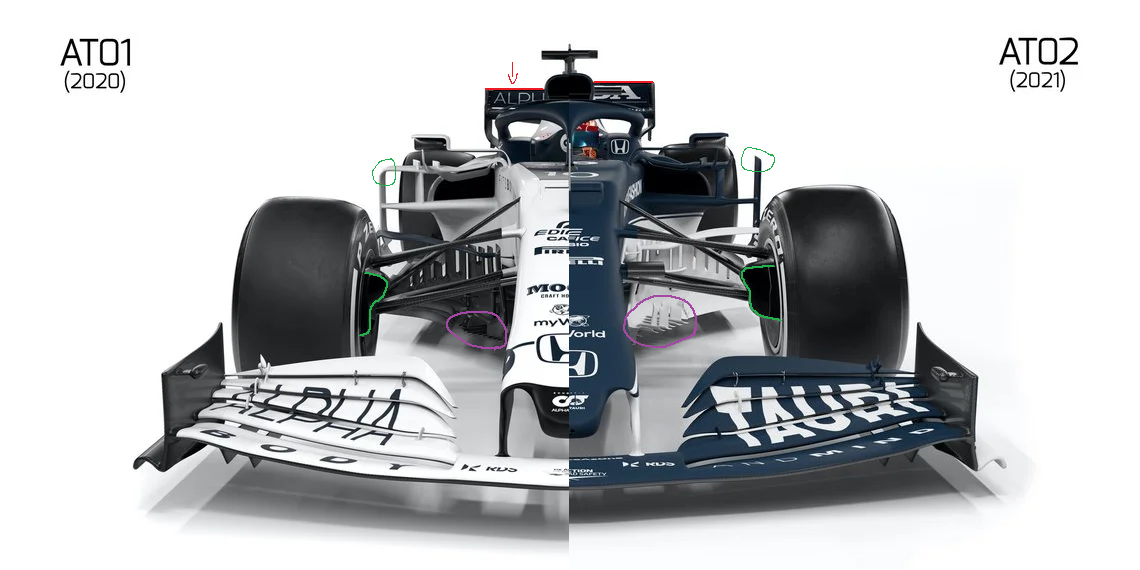 Talking about the nose, we can see it stayed pretty much the same. Each and every of these five front wing flaps are positioned exactly the same as last season although these angles are prone to setup changes. From this camera angle the nose seems to have also stayed the same although we will see in the next picture that the front scoops got greatly redesigned.

The purple lines indicate flaps positioned under sidepod plates. Their role is to send air above the floor and keep air pressure under the floor as low as possible.

Next up are redesigned front brake ducts which just got bigger although their area greatly depends on the setup. Fun fact: the brake duct area is reduced during sessions by covering it with duct tape.

Another change are the sidepod endplates which are now designed as vortices generators. I am kinda surprised that they did not implement it last season as most teams had that.

Considering there are no regulations concerning rear wings, I am surprised that their rear wing got higher, but I guess they had to find a way to retrieve downforce lost by regulating the floor. 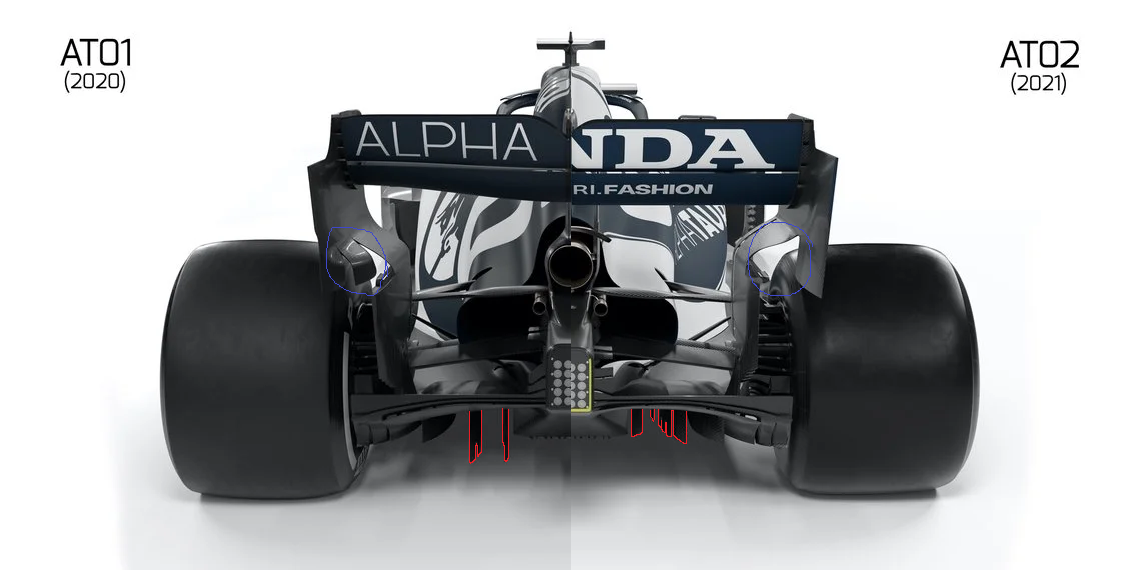 The rear of the car stayed very much the same. I have noticed only two major changes. The first ones are diffuser vanes which are now regulated and shortened by 5 cm. They are going to reduce rear downforce greatly and force teams to find new ways to make the rear end stable. This is also going to reduce dirty air created as the diffuser makes the biggest amount of dirty air.

The second change is that winglet sequence on the bottom part of the rear wing endplate which is now removed probably in pursuit of reducing drag. That is literally all changes on the rear end of the car. 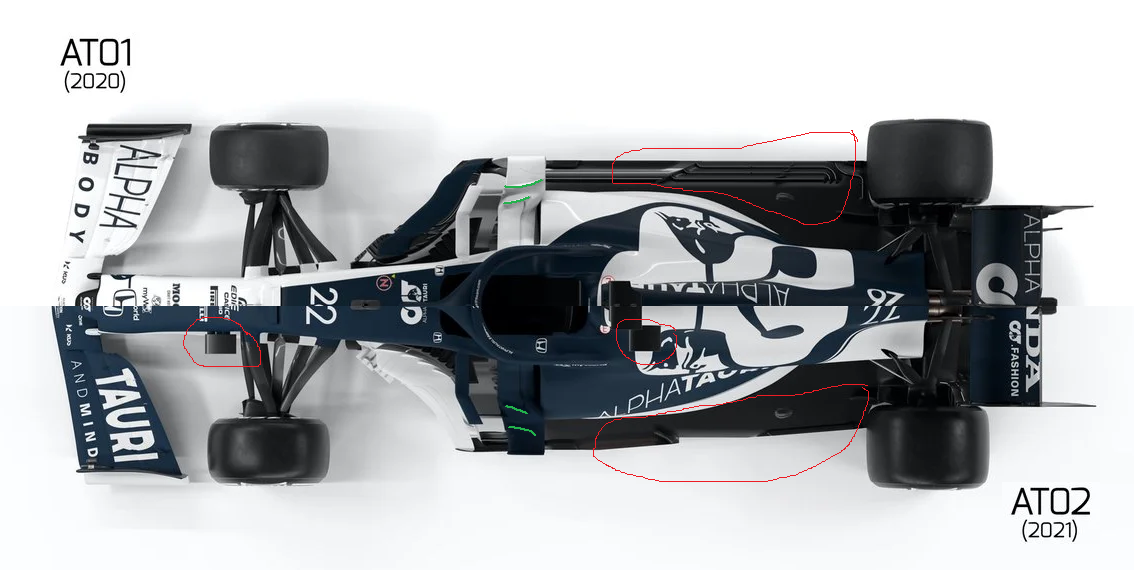 Next up is the top view. AlphaTauri kept their own characteristic shape of engine cover. The most obvious change is the floor. It’s very clean and much smaller than last year. The Italian team also designed a characteristic shape of it, much different from the Mclaren one. As you can see the front part is connected to the sidepod and wider than the rest of it. I am very excited to see where the bigger teams are going to go with new floor design especially in the next few years.

The next pretty obvious difference are those winglets on the nose and main cooling shaft. To be completely honest last year’s car looked empty without it, but practically, they are going to create a bit more downforce and that’s it. Everything else including front wing, rear wing, nose and bargeboards stayed the same. The only difference I noticed are those vortex generators on horizontal plates above the sidepod endplates. Last year they were much closer to one another and were sending air outwards while this year they are further apart and are pointing more inwards. I guess this year they are influencing more air and that air is influencing rear downforce more.

And the last picture is talking about the most important changes made. Alpha Tauri stated that they spent two tokens on this new nose. To sum it up, they made up a completely new nose scoop setup without that characteristic Mercedes-like narrow nose. I am not sure how successful it will be because of the small amount of air that will reach it but I guess that engineers calculated everything in their wind tunnel. They also invented another plate just behind the scoop that is also used to direct air.

That’s it about AT02, I hope you enjoyed my article.