Posted on 8th March 2021 by divebomb Leave a comment

First McLaren, then AlphaTauri. Now, Alfa Romeo is the third team to present their car. Similar to AlphaTauri, the C41 has a cool-looking inverted livery. So how different is the C41 from last year’s C39?

To start off, we have to inform you that Alfa Romeo changed their car even less than McLaren and AlphaTauri. 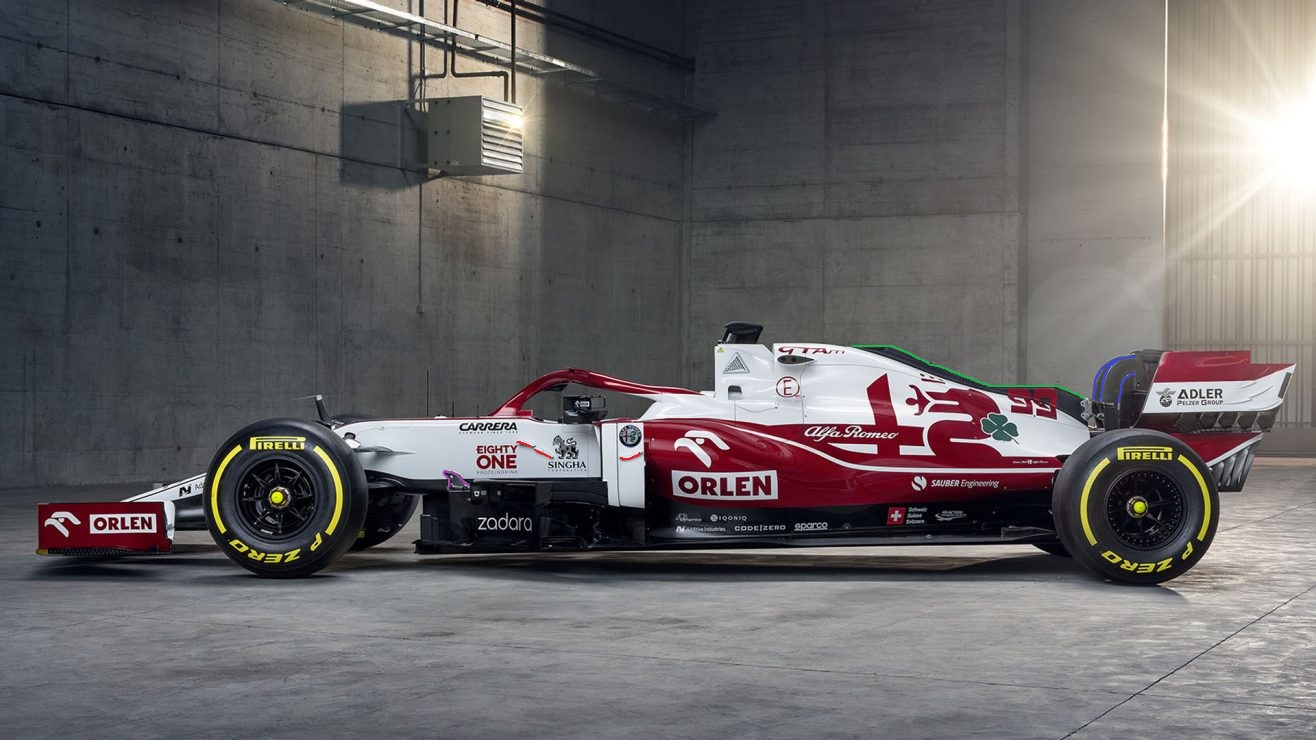 First, let’s take a look at the side view. The most visible change here is the redesigned shark fins which won’t really affect aerodynamics a whole lot. The 2017 shark fins were very influential as they created vortices and pointed the air towards the rear wing. However after regulation changes they were shrunk and now, despite still affecting air flow, the general effect is mostly cosmetic. Another very visible change is the thicker swan necks (marked in blue). Swan necks are simply pillars that attach the rear wing to the car body.

Now moving on to changes intended to significantly influence the Alfa Romeo’s drag, downforce quotient and airflow. Marked in red are small vortex generators missing from last year’s C39. We cannot confirm their exact purpose but can guess the Alfa Romeo designers added these winglets to optimise airflow towards the rear end of the car.

Many teams, especially Alfa Romeo, painted their bargeboards black and put them in shadow so other teams couldn’t copy them (*laughs in RP20*). As such, the only visible change to the bargeboard is the small winglets (marked in purple), probably used to suck in more air towards the bargeboards where they can create more downforce. 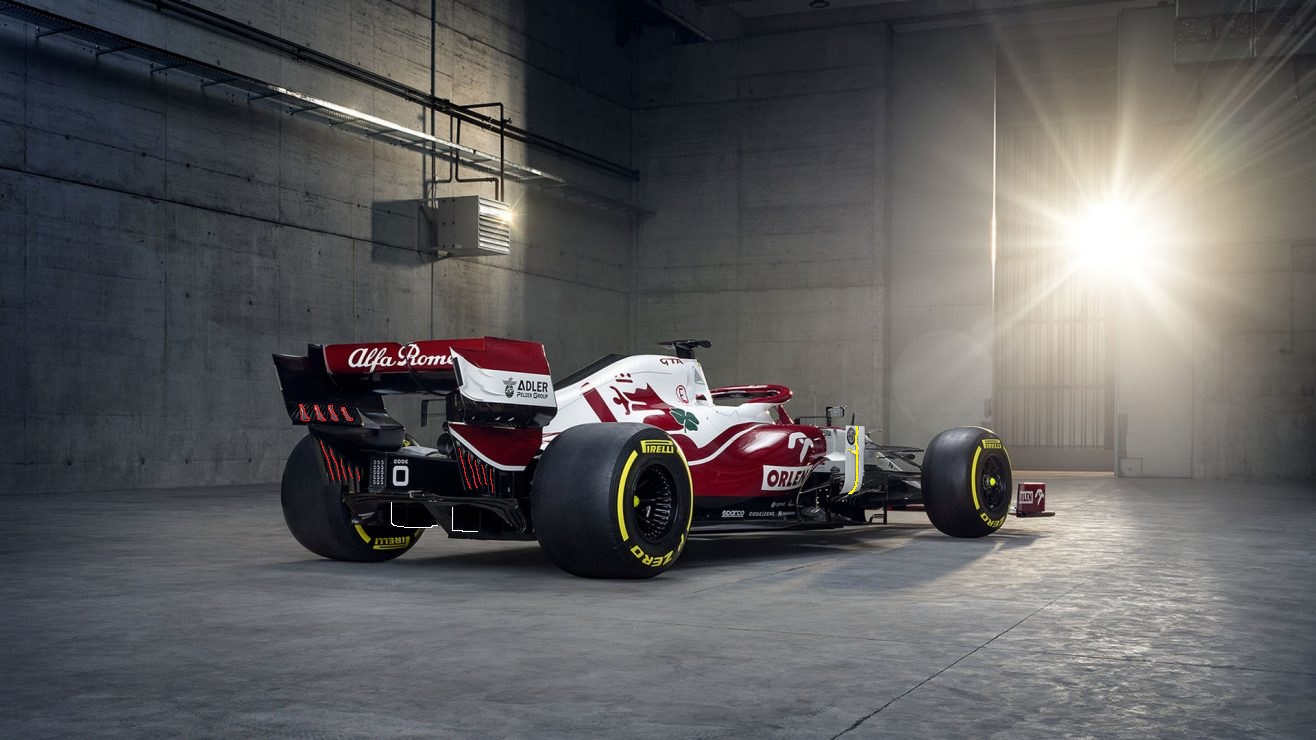 Next up is the rear area of the car. We pointed out the sidepod endplates (marked in yellow) as a great example of how teams are accelerating and directing air flow. By slotting air between the two plates, the air accelerates because it has to pass through a thinner area and the vortex generator stabilises and directs air flow.

As seen on the diffusers of the McLaren and AlphaTauri cars, they have been regulated and shortened (marked in white). These regulations reduce the dirty air created, but will also reduce rear downforce and increase drag. This is because the diffuser is used to assimilate airflow from underneath the floor with the area from behind the car.

We also marked Alfa’s characteristic slots on the rear wing. Those slots haven’t changed since last year, but we saw reason to mention them as Alfa Romeo always designs them differently to the rest of the F1 teams.

So on the lower part of the rear wing, the C41 has those long strips — also used to accelerate air — and upper slots, the conventional shafts which assimilate air pressure on both sides of the wing. If not for those shafts, the amount of turbulence created off the rear wing would decrease the air pressure and therefore increase drag immensely. 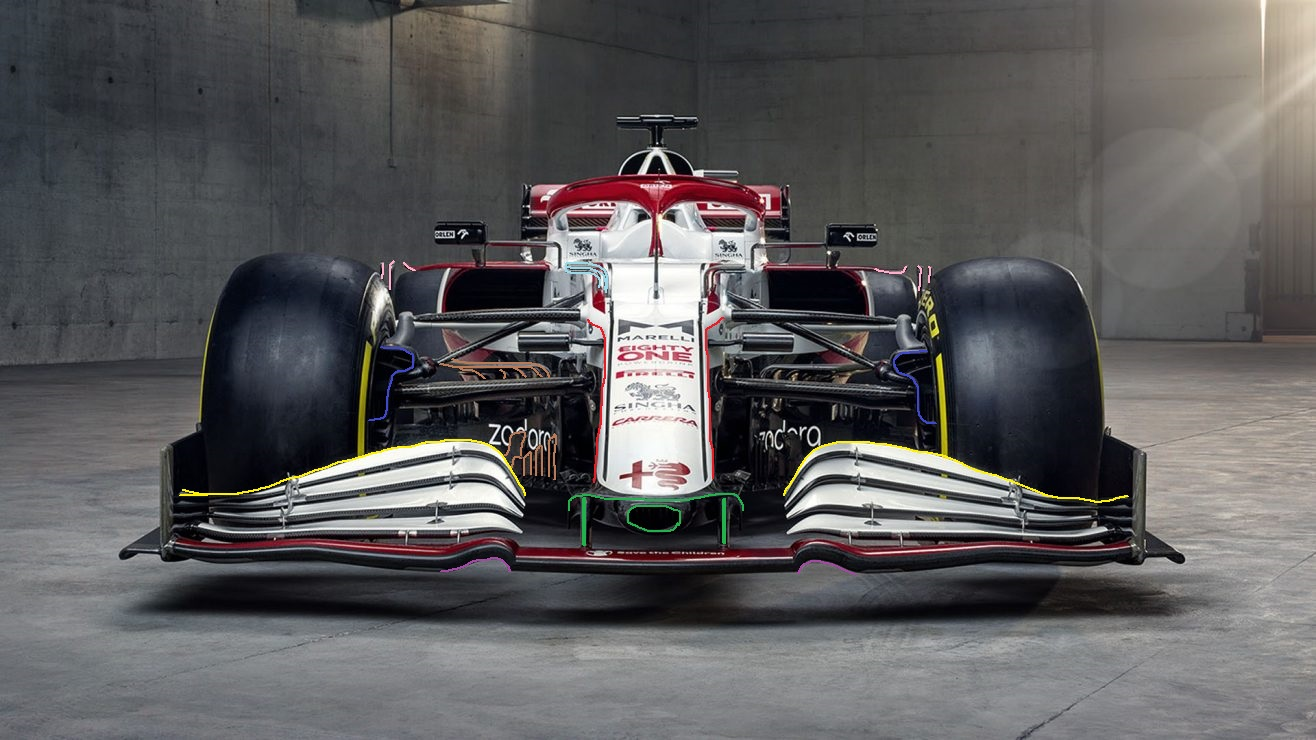 And finally, we are analysing the front end of the car where Alfa Romeo spent both tokens. The red lines indicate the narrow nose finally implemented by Alfa Romeo, making them one of the last teams to incorporate it — although the nose is still pretty wide compared to Mercedes and Red Bull. Wide noses will actually create even more downforce at high speeds due to the low pressure area underneath the wing. However, at low speeds and while turning, it does not direct air flow towards the bargeboard and thus reduces air pressure all over the car.

The tip of the nose has undergone major aerodynamic changes and improvements. The ‘Darth Vader’ style is gone, but Alfa Romeo still kept their characteristic nostril which guides air through the nose of the car.

Alfa Romeo also redesigned their front brake ducts (marked in pink) with sharper edges, to be used as vortex generators.

The flaps and winglets on the bargeboard (marked in brown) remain much the same, just like the boomerang wing and flaps connected to it.

The front wing still has an extreme outwash effect; the team added even more outwash this season by increasing the angle. Plus the small holes indicated by the blue lines were quite possibly introduced to bring more air into the wind tunnel areas.

That’s the full breakdown of the Alfa Romeo C41.