The first race of  Monaco this weekend was alright, but Race 2 was just as good if not better. Straight away we got some big drama as polesitter, Marcus Armstrong, couldn’t make it to the grid forcing him to start from the pitlane. 2nd place in the championship Liam Lawson would start the race in 1st but from the 2nd place grid slot ahead of F3 champion, Oscar Piastri. Not only was there action on the grid but in the skies with rain overnight causing all cars to run the wet compound in the morning with F2 veteran, Jack Aitken saying that the drivers would be back on dries by the end of the race. 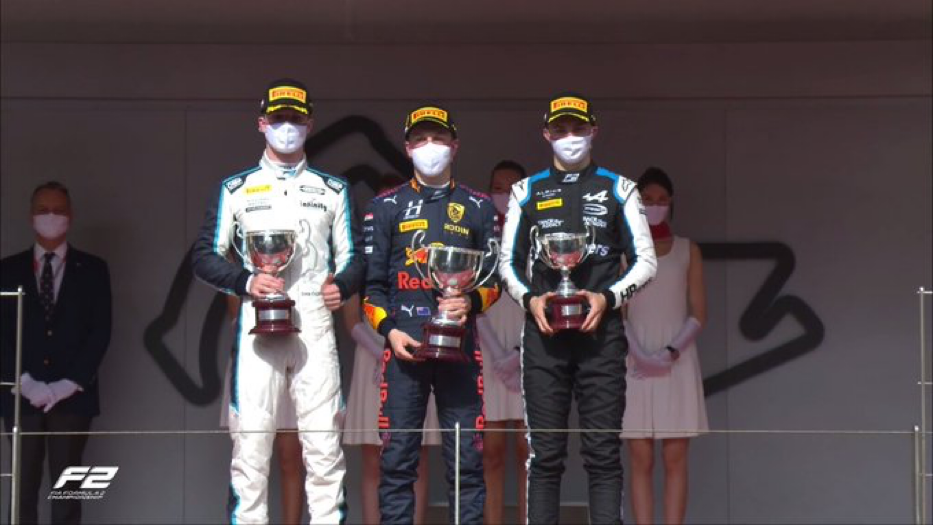 Off the line the man in 2nd, Oscar Piastri got the better getaway, overtaking fellow Oceanian Liam Lawson for the lead into Saint-Devote. Gianluca Petecof, who crashed out of Sprint Race 1, once again crashes, this time at Saint-Devote after contact with another car. The Monegasque marshalls did a stellar job at clearing his Campos, doing it before Sector 3.

Piastri’s job wasn’t done yet though as he had to defend for his life from Lawson behind, hungry to retake the lead and close in on championship leader Guanyu Zhou. After his pitlane start, Marcus Armstrong’s race did not get any better, after a visit to the run off area at Saint-Devote ended his race and brought out the Virtual Safety Car.

Back ahead on the restart, Lawson sent it up the inside of Piastri at the Nouvelle chicane, which Piastri, with nowhere to go, cut, staying ahead of the Kiwi driver. Lawson wasn’t hanging around to be let back through and took matters into his own hands, making a fantastic move into Rascasse to take the lead after his poor start. Lawson didn’t need to defend after, though, bridging a 2 and a half second gap to the Aussie.

On Lap 9, Charouz driver Guilherme Samaia, took a trip into the Saint-Devote run off zone, taking a while to get back out. Marino Sato wasn’t as successful, though, doing the same as Samaia but not rejoining the track and retiring, bringing out yet another Virtual Safety Car. During this VSC, Virtuosi gambled both cars on the dry compound which was an instant mistake, as the pair were hit by blue flags and 20 seconds a lap slower than the leaders, still on the wets.

Ever since Piastri lost the lead, he’d been struggling ahead of Dan Ticktum and on Lap 15 he lost his battle and lost 2nd place to the Brit. On the same lap, Sprint Race 1 winner Guanyu Zhou pitted back onto wets after the dry gamble certainly did not pay off. Christian Lundgaard’s weekend got even worse after a Lap 18 incident at Mirabeau ended his race again.

An intense midfield battle began between Nissany and Boschung creating a train behind them. Nissany’s inclusion in that battle ended after a whack on the wall on the outside of Saint-Devote. That battle got very heated after Bent Viscaal shunted into the back of David Beckmann. Beckmann retired as Viscaal continued although a safety car was required to move Beckmann’s stranded Trident.

On the restart it was a matter of time instead of laps left, as Lawson brilliantly got away from the pack while Piastri in 3rd was struggling to hold onto the position from Vips behind.

The chequered flag did come though, just 2 laps after the restart as Lawson took his 2nd win of the season ahead of Ticktum and Piastri. Things wouldn’t end like this though as the New Zealander was disqualified for after he was found guilty of Throttle mapping infringements, losing his win to Ticktum behind. On Twitter, the eventual race winner, Dan Ticktum posted “Liam Lawson drove an exemplary race and it’s sad to see a penalty like that”. Dan Ticktum, of course, had a win of his own taken away from him at Monza last year for no fault of his own and felt for his rival, although he’ll take the win nonetheless.