An interview with Ethan Davis

Posted on 30th July 2021 by divebomb Leave a comment

Ethan Davis is a British racing driver currently racing in the F100UK Karting Series. Ethan has picked up numerous podiums and wins, including a win in the 24H of Buckmore Park. He is in contention for the F100UK Karting Title, and is mounting a great fight, despite having limited funds to compete.

Ethan kindly agreed to an interview with DIVEBOMB where we discussed his racing.

How are you feeling about your upcoming race?

I’m feeling confident coming off a good weekend at GYG, still in the championship hunt and ever improving my pace. I’m now at the sharp end in most races after starting from the back because of licence limitations. So Buckmore I’m hoping is positive. I have some potential investors coming so I’ll make sure to put on a good show.

How far do you believe you can take yourself in the championship?

Hopefully after Buckmore I will be in a much better position, I will be off the rookie plates and will be able to start from anywhere rather than just the back so my points in the heats will increase hopefully if I perform how I currently am. The goal is to win the championship in my rookie year. 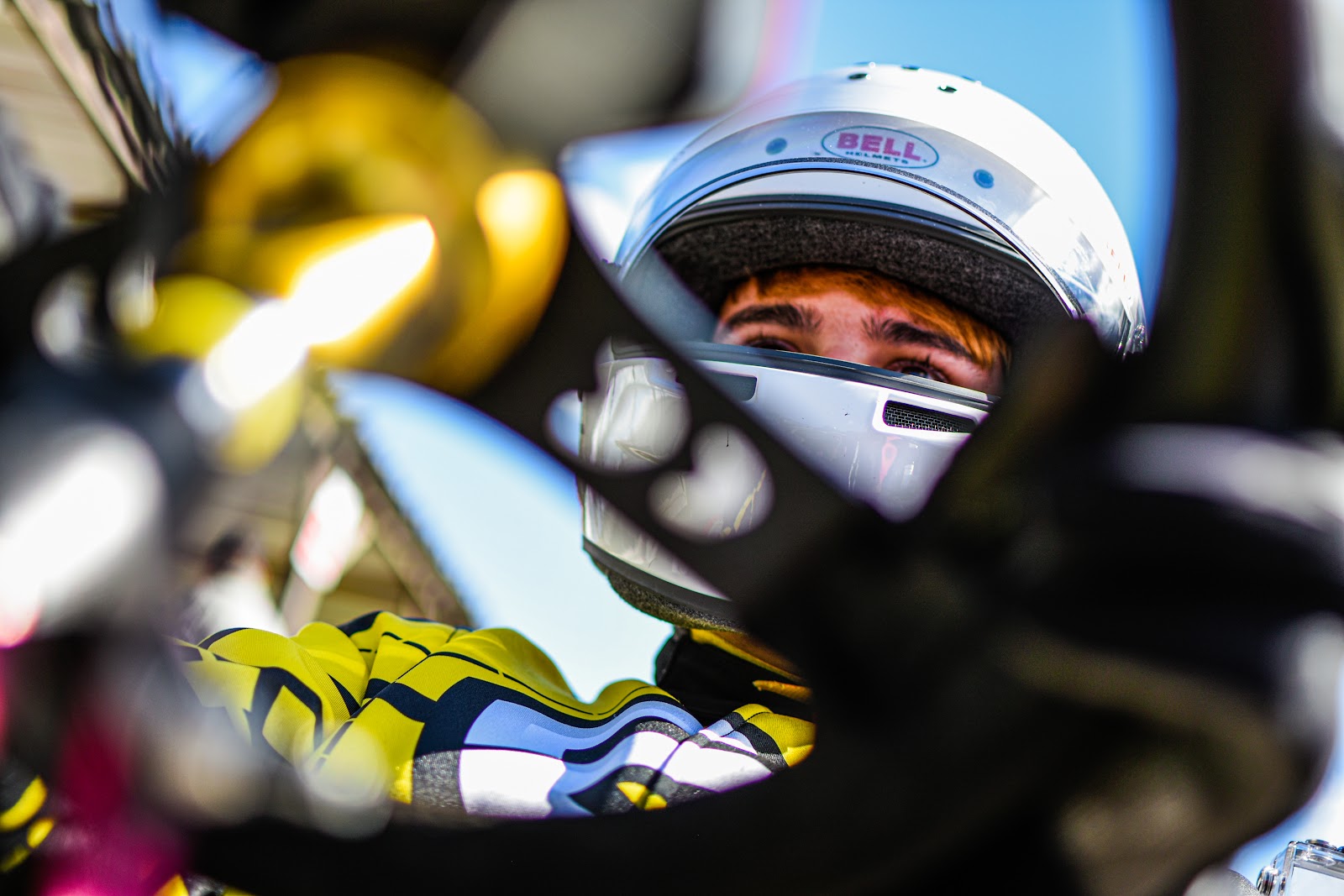 Do you have any idols, or people you look up to in racing?

For sure! I look up to people like Nicholas Hamilton, I’m autistic so he is a great example to overcoming issues in life.  I’ve got to say that my current team manager Kevin Ford is a person I look up to a lot. He teaches me loads. Also Sebastian Vettel, because I grew up watching him being absolutely fierce in wheel to wheel combat.

What has been your favourite moment in racing so far?

My favourite moment in my career so far has to be the Silverstone 24 Hour, crossing the line with everyone on the pitwall, people in the stands. Although limited, it was great to see them out and about, and the marshals waving, and yeah just an amazing experience for my car racing debut. In karts it has to be either last time out at GYG. My pace was just incredible and I made real progress with everything, or the Buckmore 24 hour because it was just a great event where i met so many people, learnt so much and won my class, which is always nice.

You have mentioned previously that your funds to compete are limited, how has this affected your racing, and what do you think about the barrier between money and motorsport?

At the moment, I’ve got to be really careful with what I do because money is tight to the point where repairs could be impossible if I have a bad shunt. Trying to get the budget for the British Karting Championship for 2022 will be difficult but we believe it’s doable, while also hoping to do some more endurance in cars throughout the year. Currently the money barrier in motorsport is crippling young talent. It’s my belief that in years to come, it will create a substantial bottleneck and will be reverted to the days of old where only aristocrats and the like are able to make it in motorsport. It’s down to the FIA to reduce costs, they need to inject funds into the lower divisions and even go as far to create true spec series where they control all the cars etc., to keep costs to an absolute minimum. The fact is unless you are born wealthy or have access to the level of money required, no matter how good you are at racing you are going to struggle.  Finding a niche for sponsors is becoming increasingly hard because people are exhausting all options, which is only fair you can’t blame them.

It’s no surprise you are quite active on social media such as Discord and Instagram, how has this helped you to integrate into the community and become known to more people?

Oh massively, I don’t have a fan base per say, I  just have people who I can talk to within the community. It’s great to get to know people. I’m no different to yourself or anyone else. I enjoy motorsports as a spectator but I think some people also like hearing perspectives from someone within the racing side of things to get an idea of what may be going on behind the scenes. It’s a great way to get my name out there, but it has its pitfalls of course it does, there are people who send hate and threats etc., but I try to look past that. It’s the internet though, and I’ve come to expect it from some people.

What are your future ambitions in motorsport?

I’d love to pursue a career within Endurance, the Buckmore 24, Silverstone 24 and the virtual 24 hours of Daytona. All been amazing experiences, and I feel the strategy is so much more in depth. Not to mention my consistency seems to suit endurance over sprint racing, but currently I’ve got to do some sprint racing in karts to get the experience. I’m not blind to the fact that race craft takes years to perfect and won’t happen overnight.